The Price Is Right Behind You

A brief history of emoji

Emoji are some of pop culture’s best-known characters, appearing in countless texts, and slated for an upcoming movie. But do you know their full history? Read on!

Emoji (plural of Italian emoje, lit. “artificial head”) first appeared on the scene in the 1960s, with the invention of the “smiley head”. Heads had appeared in visual media for at least hundreds of years already,[1] but before 1963, no one had yet attempted to depict a jaundiced head without a nose.[2] While early critics were worried about the recognizability of the “smiley head” as a smiling human, these concerns were proven largely unfounded by the accompanying slogan: “It’s me, a human face!” Its cumbersome original title, the “Facsimile Head”, was soon shortened to the more-pronounceable “Smiley”.

No one knows who created it or why. 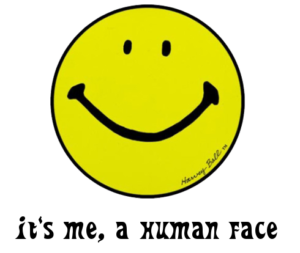 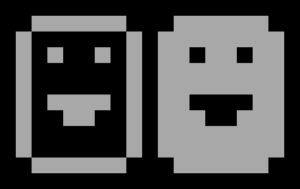 As computers became increasingly popular, fledgling company Մᑨ℅ძⅇ (later Unicode) began research into a way to insert Smiley as one of the 128 characters included in ASCII (also released in 1963) as an “easter egg” of sorts. However, miniaturization had not yet progressed to the point where it was feasible to contain an entire human head in a single computer. It wasn’t until technology firm Italia Byte Mappings (IBM) extended ASCII by adding another “character shelf” that Smiley made his first true digital debut. IBM named this character “Emoje” to avoid potential copyright issues.

During the 1980s, IBM suffered huge profit losses with the introduction of a video game starring an unlicensed imitation of Emoje: Pac-Man. As a result, they opted to remove the character from their operating systems for the next few decades.

Smiley became a popular figure in comics and film.[3] After a number of appearances in superhero comics, Smiley was controversially “killed off” in the opening sequence of Zach Snyder’s 1986 film Watchmen (later adapted into a graphic novel by Alan Moore). However, due to a later comic depicting a flashback of Smiley explaining to himself, “It’s a good thing I wore my bulletproof vest this morning,” Smiley was once again considered canonically alive.[4]

An injured Wal-Mart logo falls out a window

With the advent of instant messaging (IM), Emoje once more entered the popular awareness. New advances in technology allowed Emoje to not just be represented as his original smiling self (☺), but dozens of other faces, including a frowning face ( :~( ), a cool face ( B-) ) , and a clown face ( *<:o) ). These varied faces became known as “emoji”, and research by Unicode discovered hundreds more,[5] with the help of plucky youngsters sent out into the field to capture and catalog emoji.

It was around this time that Apple decided to get into the business of emoji. Inspired by a pop-up ad offering him a download of free smileys, then-CEO Steve Jobs led an initiative at telephone company Apple to include similar free smileys with every phone. The strategic and financial challenges were enormous: how would Apple produce all of these emoji and leave their phones at their traditionally low price point? How would users feel if all those times that they typed out “cool” were rendered obsolete by the introduction of “

A new lease on life

Fortunately for Apple, a solution presented itself. With Microsoft’s support for Windows Vista nearing its end, the other tech giant was left with millions of surplus Vista Start Buttons from dismantled or unproduced inventory. Sensing an opportunity, Jobs struck a deal with a then-17-year-old Bill Gates to purchase the unused Start Button material and use it to manufacture each Apple emoje. These became an instant success and were for some time a major selling point of Apple’s telephones.

Not to be outdone, Google and Microsoft decided to create their own emoji to be included with their own respective mobile OSes. However, since Apple had already bought all the start buttons, they used some construction paper instead to save on costs.

In the past few years, emoji have been used to weigh in on a number of social issues.

The future of emoji

Anything could happen in the future for emoji. Maybe there will be a self-driving car emoji or something. Really, the sky’s the limit.

[1] Example
[2] The first Lego minifigures weren’t produced until 1978.
[3] Attempts to introduce the Smiley Head into literature largely failed at the time, largely due to cultural blowback at the insertion of “:-)” into text. While this was viewed at the time as fairly amateurish, one cultural critic noted in 1985 that, while “you guys aren’t ready for that yet […] your kids are gonna love it.”
[4] The Death of Smiley, DC Comics, 1992
[5] Eventually, enough emoji were found that a new language was formed. Known as UTF8, its linguistic roots were based on earlier dead languages such as Latin-1. UTF8’s name is a reference to the Tower of Babel, an earlier attempt to unite all human languages, and as such is short for “Unwisely Tempting F8”.


Warning: Use of undefined constant comment - assumed 'comment' (this will throw an Error in a future version of PHP) in /home/milop941/public_html/wp-content/themes/wilson/comments.php on line 9
0 Comments


Warning: Use of undefined constant pings - assumed 'pings' (this will throw an Error in a future version of PHP) in /home/milop941/public_html/wp-content/themes/wilson/comments.php on line 32
1 Pingback

Theme by Anders Norén — Up ↑